What is Cryptocurrency and How does it work? 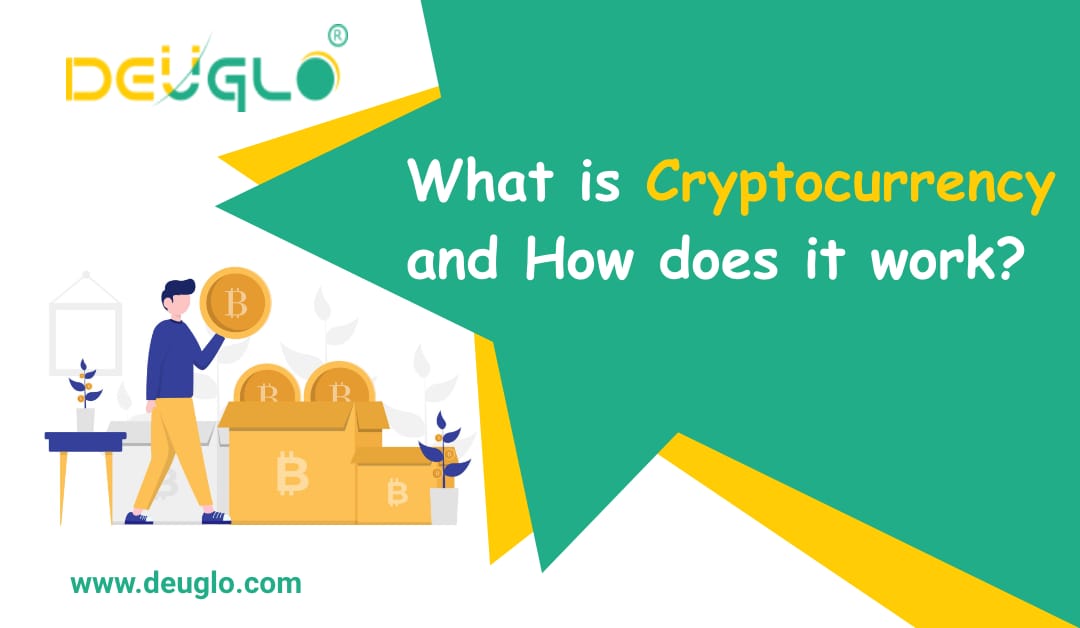 We are going to explain what exactly cryptocurrencies are, so that if you have heard about them in general or about a specific one like Bitcoin, you can know what it is exactly. It is a type of digital exchange medium that has been with us for more than a decade, but it has been in recent years that its fame has increased the most.

In addition to explaining what they are, we are also going to simplify how it works in this brief piece. Meanwhile, the technology behind cryptocurrencies can be adopted by every other business, beyond decentralized finance. So, if you need to employ this technology in your business, we, at Deuglo Infosystem Private Limited, will be ready to use the technology to drive your business for you.

Firstly, what is a cryptocurrency?

Cryptocurrencies are a digital medium of exchange. It fulfills the function of a coin, and hence they are known by that name. However, it is something totally digital, using cryptographic methods to secure your financial transactions, control the creation of new units, and verify the transfer of assets.

Therefore, we can consider them as a decentralized alternative to digital currencies. By the term “decentralized” we mean that these currencies are not controlled by a single service or company. The same happens with conventional currencies, centralized and organized by entities and banks, so they are an opposite method to both.

The first cryptocurrency was the Bitcoin created by “Satoshi Nakamoto”, a pseudonym that corresponds to a person who no one knows exactly who he is. This person published an article in 2009 in which he described a P2P payment system that he called Bitcoin. After a few months, he himself published the first version of the software that allows managing the currency network, and begins to interact in forums with the first interested parties.

Bitcoin has a privacy problem when they send you money: these services are used to hide the transfers

It is not yet really known who this person is, but it is known that he has become one of the 20 richest people in the world. Bitcoin and its technology have had such an impact that over the years more and more alternatives have been arriving, new alternative cryptocurrencies that have been increasing in value with greater or lesser luck. Since then a large number of different cryptocurrencies have been created.

Another thing you should know is that the value of each cryptocurrency is variable,  and that in recent times there is a speculation similar to stock market assets. Therefore, there are many people who are creating wallets in services where they can buy cryptocurrencies, and try to buy them to sell them later and thus earn money.

In this it is not recommended that you get involved if you are not in the know, because there can also be abrupt falls in the value of cryptocurrencies and you end up losing your money. However, in the case that you have cryptocurrencies, it is also important to know, since if you are going to operate with them to make payments you should know that you may find variable prices for this reason. There are several alternatives to see the heat of cryptocurrencies.

How does cryptocurrencies work?

To understand how cryptocurrencies work, you must also understand several basic concepts. The first is that it is based on a decentralized computer network, which means nodes spread all over the world with copies of all the transactions that have been carried out. The second concept is that of miners, people who are part of the nodes, and who have the incentive that every time new Bitcoins are generated they are distributed among those who are part of these nodes.

Each cryptocurrency has its own algorithm, which is the one that manages the number of new units that are issued each year. For example we have Bitcoin, which every four years reduces the amount produced by two, and only a total of 21 million Bitcoins will be issued. This is a fundamental difference with conventional currencies, since banks modify their value at their free will. This gives it more capacity to generate value against currencies that can devalue when the banks say.

And since the algorithms of the different cryptocurrencies are different, the maximum units of each cryptocurrency also vary. This can also affect its value and performance, although it is not something that the most basic users should worry so much about.

This decentralized computer network with different nodes is known as Blockchain. Its blocks or nodes are linked and secured using cryptography. Each block links to a previous block, as well as a date and transaction data, and by design are resistant to data modification.

Therefore, it is as if this network or chain of blocks were an open and public free in which all the transactions made by two users are recorded. When you make a transaction, its data is recorded in a block, and it is automatically replicated in the rest. This means that the data cannot be modified or manipulated without modifying the rest of the blocks, something extremely complicated.

What are the other existing cryptocurrencies?

As stated above, Bitcoin began to take its first steps in 2009. Since then, more and more new cryptocurrencies have arrived over time. Some have been positioning themselves for years as robust and popular alternatives such as Ethereum, Litecoin, and others like it. Ethereum even has a new version called Ethereum 2.

But there are also some new surprises like the newcomer Dogecoin, a cryptocurrency created for fun and based on a meme. But since Elon Musk spoke of it claiming that it is the people’s cryptocurrency, its value has not stopped growing.

And like you are , there are many alternatives with rising values, and new ones that are coming out. Some proper names among the most valued are Binance Coin, XRP, Cardano, Tether, Polkador, Uniswap, Chainlink or Bitcoin Cash. However, most of them are left with a value that is very far from that of the big three, which are Bitcoin, Ethereum and Ethereum 2.

There are some companies and services that have also tried to create their own cryptocurrencies, but at the moment they do not seem to be achieving good results. Facebook changed the course of Libra, which will become an alternative to PayPal instead of a cryptocurrency, and Telegram also abandoned its project to create a cryptocurrency called Gram. However, it is to be hoped that new alternatives will continue to emerge over time.

Know more about Cryptocurrencies and the technology driving it, Blockchain technology, have come to stay. The underlying technology has great importance and applications in different spheres of economy and businesses, ranging from health industry, finance sector, transport and logistics and many others sectors of the economy. You can adopt this technology to move your business to high level. Speak with us at Deuglo Infosystem Private Limited, Bangalore, Karnataka, India.